PRIDE COMMUNITY RIGHTS AND ECONOMIC GROWTH OF A COUNTRY

LBGT refers to the initialism that stands for lesbian, gay, bisexual, and transgender communities. This vulnerable community struggles all over the world, oftentimes lacking their basic rights and livelihood.

Yet, this community still tries to survive with hope.

Sexual orientation and gender identity are an integral part of a human being and hence should be given importance while living in an inequitable world. The inclusion of such communities not only strengthens equity and freedom but also creates a sense of love and care for all in a humanitarian sense.

Sexual orientation should not be considered a parameter while discriminating against human and necessary rights—the right to live is the right to create a livelihood.

- research by the William institute in 2014

The LGBT community — consisting of a bisexual, transgender, and lesbian population of a country, tend to suffer not just mentally physically, but also undergo economic crisis. The countries where being LGBT is considered sinful or shameful undoubtedly create big barriers to access to livelihood and self-independence for individuals.

The LGBT population is oftentimes a  vulnerable community—they are mistreated and are denied access to proper education and training to stand on their own feet economically. Hence, this reduces their share in the educated population and causes addition to illiteracy in the country.

Not just that, even the parents of such individuals usually disregard their presence and therefore provide little to no education incentives.

Moreover, being uneducated, the chances of them getting good employment are negligible, making them dependent on others or human rights organizations for life survival.

The LGBT community is given very few economic benefits and no support from family and laws, yet still sometimes manages to achieve the qualification. However, society—being governed by discriminatory perspectives—try to discourage their economic opportunities.

“about 60% of the transgender community have never attended schools in India and about 92% of transgenders are deprived of the right to participate in any form of economic activity in the country, with even qualified individuals, refused jobs”

Hiring businesses prefer almost anyone over a pride community member, even if they are more eligible. This gives rise to the educated unemployed ratio and implying to loss of output proportion.

The social backgrounds and religious norms give rise to discrimination towards a living being with different body structures and sexual preferences, which instigates hatred and insensitivity. This is directly related to abuse and mental trauma —  reducing labor productivity of LGBT individuals who get placed into the labor force population. Not just that, the workplace harassment and environment can affect the will to work and hence reduce economic power.

‘’In America, studies show that anywhere from 15 percent to 43 percent of gay people have experienced some form of discrimination and harassment at the workplace. Moreover, a staggering 90 percent of transgender workers report some form of harassment or mistreatment on the job."

These workplace abuses pose a real and immediate threat to the economic security of gay and transgender workers. 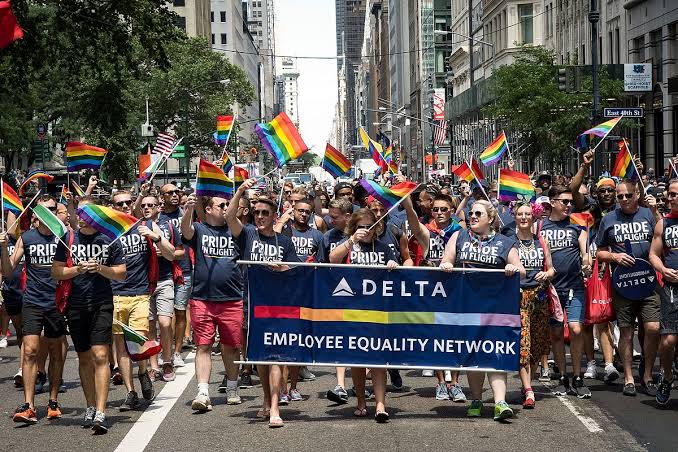 Being placed in a good job position, or trying something new for themselves is a big question of sustenance. For instance, if these individuals received a degree job, they might not be treated the same as other employees—hence, facing wage or salary discriminatory policies in ventures.

Funding to start their own business is also another big crossroad, supposing they even get the funding, another challenge is thriving in the market and finding rational customers who aren't biased by social norms.

In poor countries with a dull mentality on LGBT rights, individuals are left begging for their survival task. This impacts the poverty statistics even more and hence worsens the ratio, hence inducing negative economic conclusions.

“Nearly 20% of the gay population in the USA is homeless, 8% to 17% of gay and transgender workers report being passed over for a job or fired because of their sexual orientation or gender identity.’’

Micro-level implications include much more than the above-mentioned difficulties. One such example is the loss of lives. The pride community loses its members worldwide to suicides and depression disorders.

“The suicide attempt rate among transgender persons ranges from 32% to 50% across the countries. Gender-based victimization, discrimination, bullying, violence, being rejected by the family, friends, and community; harassment by an intimate partner, family members, police, and public; discrimination and ill-treatment at healthcare system are the major risk factors that influence suicidal behavior among transgender persons.”

Global human development index, happiness index, equality, and freedom indexes play an important role in projections of socio-economic aspects of a country and are affected by rules and liberty laws. Coming in top rankings undoubtedly gives a huge benefit in global listing and preference for being a “good” country.

Establishing a global image leads to direct economic prosperity. Enforcing human rights for the pride community is one such way that would improve the status of a country's image and hence attract more international trade as well as better economic collaboration.

“A study in the United States, Netherlands, UK, Sweden, Greece, France, and Australia by Klawitter showed a wage difference,  on average gay and bisexual men earn 11%  less than their heterosexual counterparts with the same qualifications.” 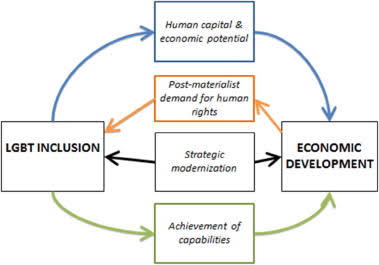 MNC’s across the world are transforming their work rules and moving forward for the well-being of employees—including equality for the transgender community. This changing ideology of companies largely affects their participation with countries having LGBT rights and freedom. A nation with low-lying laws might lose its FDI benefits.

Coming to the part of unemployment, labor force, and GDP, it is apparent that an educated population will contribute to the workforce, and therefore spur economic growth.

If we refrain from putting barriers on the employment of the LGBT community and instead formulate favorable policies, a nation can surely benefit from higher employment, high output, and an upward moving GDP. This in return will raise the per capita income for not just the affected individual but for the whole population.

“The macro-level analysis reveals a clear positive correlation between per capita GDP and legal rights for LGB and transgender people across countries, as measured by the Global Index on Legal Recognition of Homosexual Orientation (GILRHO) and the Transgender Rights Index (TRI) respectively.

The simplest correlation shows that one additional right in the GILRHO (out of eight rights included) is associated with $1,400 more in per capita GDP and with a higher HDI value. In other words, countries with more rights for LGBT people have higher per capita income and higher levels of well-being.”- school of law, William Institute

Initiative to improve the standard of living and promote an equal,  free, safe environment for vulnerable Pride communities will create a huge impact and create a world of serenity and prosperity.