On September 16, 2007, employees of the Blackwater Security Consulting private security firm opened fire on unarmed Iraqi civilians in Nisour Square in Baghdad while directing traffic. While reports differ on the death toll, the Iraqi government eventually found that the Blackwater employees had killed 17 civilians and injured 20 more. 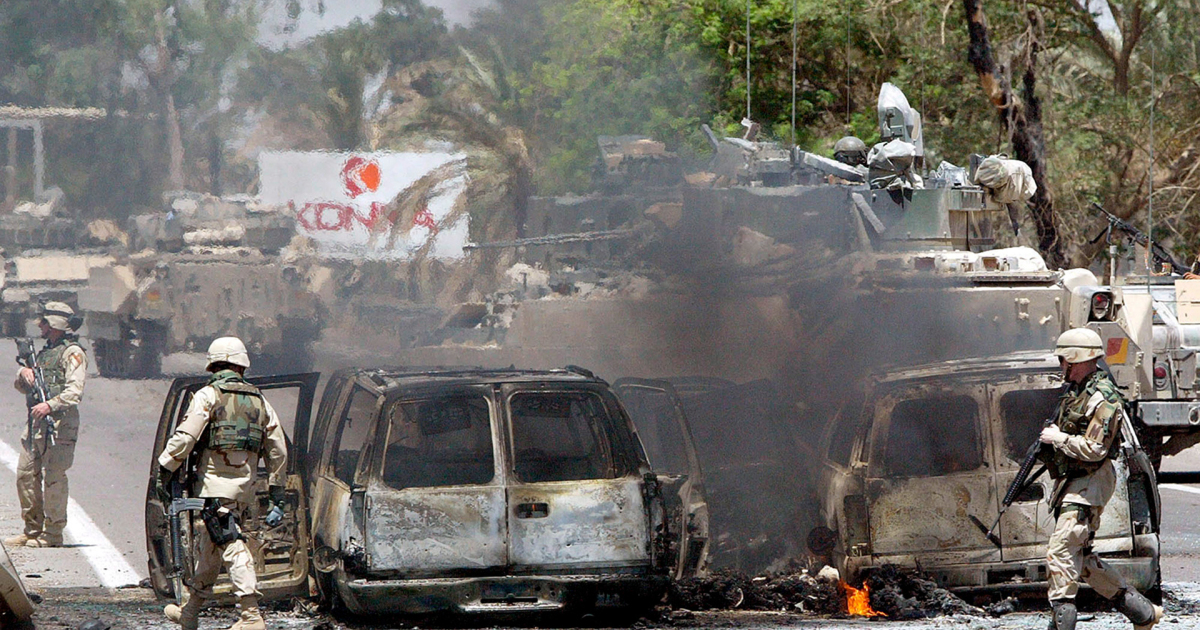 Blackwater, which has since rebranded itself twice and is now known as Academi, is a private military company that, at the time, had a $1 billion contract with the United States government to provide security services to US officials in Iraq. There were 1,000 Blackwater security guards in Iraq on the day of the massacre.

Around 12 pm on September 16, 2007, 15 Blackwater employees in the tactical support team known as Raven 23 were driving four trucks in an armed convoy through Nisour Square to get to the site of a car bombing, which had happened earlier in the day.

When the guards got to the intersection at Nisour Square where the massacre took place, some of them got out of the trucks to stop traffic so the convoy could get through.

Reports differ on what actually happened at Nisour Square that caused the employees to open fire—Blackwater claimed that Iraqi insurgents had ambushed the convoy and the Blackwater employees were returning fire. Most reports, however, state that Blackwater guards opened fire when one car didn’t stop at the intersection.

A Blackwater sniper, Nicholas Slatten, opened fire first and shot the driver of the car. The driver, who was shot in the head, lost control of the car, so the car continued to roll forward towards the convoy, which is when other Blackwater guards also opened fire with machine guns and grenade launchers.

According to eyewitness accounts of both Iraqi civilians and other Blackwater employees, several Blackwater guards  began shooting recklessly at Iraqi civilians in the square, even those who were fleeing or turning their cars around to flee.

In events that are eerily similar to the horrific My Lai massacre of 1968, the Blackwater guards continued to fire at unarmed civilians. One guard wouldn’t stop shooting until another Blackwater guard drew a gun on him and threatened to shoot him if he didn’t stop.

Within 20 minutes, 17 civilians had been fatally shot, including two boys who were only nine and eleven years old, and 20 more had been wounded. It is important to note that none of the civilians fired at the Blackwater guards.

Furthermore, after the shooting at Nisour Square had stopped, a Blackwater convoy (which could have been Raven 23) opened fire on civilians in traffic at another intersection just a few hundred yards away.

After the massacre, the State Department, which had a history of allowing misconduct,  did not hold the firm accountable. Instead, they tried to help and protect Blackwater by cleaning up evidence in the square and promising the employees involved immunity for what they told State Department officials, which they didn’t have the authority to do.

However, the vehicles had already been repaired and repainted by the time the FBI found them. Thus, Blackwater had no evidence that its guards were only returning fire—an action that would have been within the rules of engagement, and not illegal.

Blackwater had a history of being violent and aggressive: Blackwater guards regularly drove convoys up the wrong side of the road, used smoke bombs, crashed into civilian vehicles, and fired their guns as warnings. One journalist, Robert Young Pelton, spent one month with Blackwater in Iraq and stated that Blackwater guards “use their machine guns like car horns.”

In one incident on December 24, 2006, one drunk Blackwater guard, Andrew Moonen, got into an argument with one of the Iraqi vice president’s guards and shot and killed him. The guard was immediately flown out of Iraq, but no charges have ever been filed against him. All in all, Blackwater had a dark history in Iraq prior to the Nisour Square Massacre.

The trial against four Blackwater guards involved in the shooting – Nicholas Slatten, Dustin Heard, Evan Liberty, and Paul Slough – did not begin until June 17, 2014, because of previous issues the FBI had regarding evidence.

The trial lasted ten weeks, and the FBI had flown in 30 witnesses from Iraq, which marked the largest number of foreign witnesses to ever be brought to the US in a criminal trial. 13 of the Iraqi witnesses were people who had been injured in the massacre and several others were relatives of people who had been murdered.

Nicholas Slatten, who was the first to open fire, was charged with murder because the statute of limitations prevented the FBI from charging him with manslaughter. Heard, Liberty, and Slough were all charged with manslaughter. Although 17 people were killed, the FBI only charged the Blackwater guards in 14 of the deaths for violating rules regarding the use of deadly force.

Heard, Liberty, and Slough were given sentences of 30 years. However, in 2019, the three men’s prison terms were cut in half when a court ruling vacated the men’s original sentencing.

In December of 2020, President Donald Trump pardoned the four Blackwater guards in a    similar fashion to President Richard Nixon’s pardoning of Lieutenant Calley, the man who ordered his soldiers to slaughter unarmed Vietnamese civilians in what is known as the My Lai massacre as well as participating in it himself.

The Charlie Company of the US military tortured and slaughtered 504 unarmed civilians, mostly women, children, and elderly people, on March 16, 1968, in the My Lai sub-hamlet during the Vietnam War. The soldiers had been given bad intelligence, and rather than leave when they found the intelligence to be false, they massacred innocent people.

The massacre lasted four hours and only ended when another US soldier, Warrant Officer Hugh Thompson, intervened and ordered his men to shoot any Charlie Company troops who shot at the civilians. Without his intervention, the massacre would have continued. Additionally, the massacre was first reported as a US military victory.

This event goes to show how the US military has a tendency to make excuses and cover up its inexcusable actions, as well as not holding military personnel who perpetrate these actions accountable.