History of the United Nations

The failure of the League of Nations, the original peacekeeping organization created during World War 1, shed light on the need for reform in order to create an establishment to maintain world peace.

Thus came the creation of the United Nations in 1945, a milestone creation that is still highly influential today.

The League of Nations, initially intended to prevent another war as tragic as the First World War, had been a major failure due to the world leaders’ failure to cooperate in times of conflict.

The absence of the United States particularly weakened the mandate of the organization. President Woodrow Wilson attempted and failed to convince the Senate to approve a United States role in the League. Both politicians and everyday Americans grew weary of the country having an active role in foreign affairs and instead preferred to stay isolationist. To Wilson’s disappointment, the League of Nations was founded officially without the inclusion of America, one of the world’s most powerful nations at that point. Moreover, the organization had a fundamentally flawed structure with unanimity required for all major decisions. This made it very hard for the League to achieve anything substantial. Eventually, Germany, Italy, and Japan left and by the 1940s, most of Europe had fallen under Nazi control.

In the summer of 1941, before Pearl Harbor, President Roosevelt met with British leader Winston Churchill. During this meeting, Churchill and Roosevelt outlined the plans for the creation of a brand new organization to take the place of the League of Nations. Their goal was to officially establish what they would come to call the United Nations soon after the end of the war. The plan was called the Atlantic Charter, in which America and Britain promised to follow through with the UN’s creation shortly after the war. 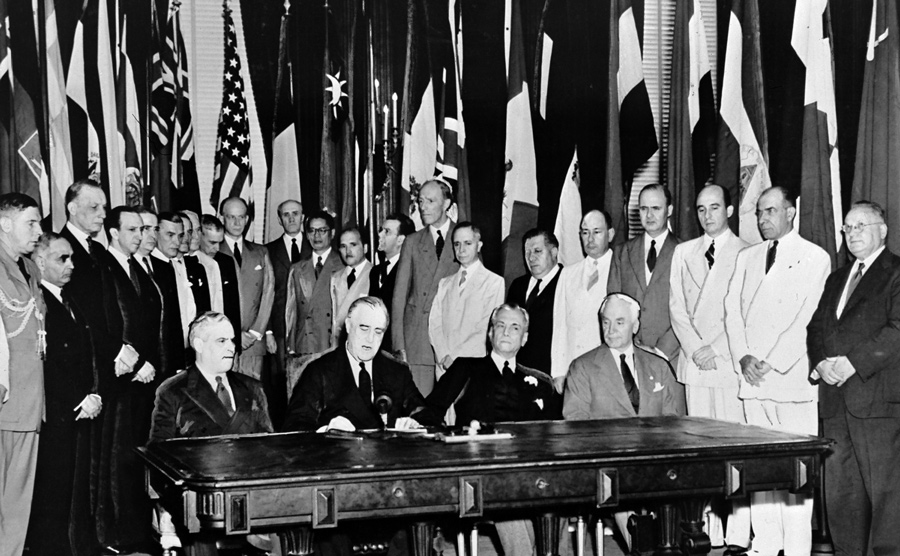 The sixth clause of the Atlantic Charter declared that “after the final destruction of Nazi tyranny they hope to see established a peace which will afford to all nations the means of dwelling in safety within their own boundaries, and which will afford assurance that all the men in all the lands may live out their lives in freedom from fear and want.”

Months later, when the United States entered the war, all of the Allied Powers promised to work together and signed the Declaration of the United Nations, vowing to create a new organization in which they would dedicate utmost importance to peacekeeping and anti-war efforts. A total of 26 states signed the Declaration, and in the years leading up to the war’s end, each country debated plans for representation in the UN and proposed ideas before the San Francisco Conference took place near the end of the war.

The San Francisco Conference was held on April 25th, 1945, a few weeks after the death of President Roosevelt. Vice President Trumaninaugurated as President immediately after his death, was now faced with the challenge of handling the conference.

The conference began with multiple controversial issues debated, specifically, the issue of representation for countries such as Argentina and Ukraine. Many of the Allied nations were hesitant of Argentina’s representation due to the fact that Argentina had supported Axis powers (Germany, Italy, and Japan) during the war. The Soviet Union spoke out against including Argentina but ultimately agreed when several Latin American countries threatened not to allow Ukraine, then part of the Soviet Union, to join the UN. In August 1945, four months after negotiations had begun, the conference was closed. The majority of countries involved agreed to ratify the agreements, and the United Nations officially came into place on October 24th that year.

The United Nations Day is every year on October 24th, in memory of the day it officially came into existence.

Currently, the United Nations is active and branched out in a multitude of areas with goals as ending world hunger, eradicating poverty, arms control, and preserving the environment. While some question if the United Nations is still relevant, one can simply look at the achievements to answer. Among this eradicating smallpox, saving the lives of 90 million children, and signing more than 550 treaties on disarmament, human rights, refugees, and the millennial and sustainable development goals.