What was Gamestop Short-Squeeze All About?

Gamestop is an old fashioned video-game retailer originating from Grapevine, Texas. It brands itself as the world’s biggest video-game seller, but in today’s age of digital and online gaming, it is slowly losing relevance.

However, for the month of January, “Gamestop” was the only word on the lips of stock market enthusiasts. The rise in the market value of the Gamestop share was the only event along with the Presidential Election and the BLM movement that took COVID-19 out of the front page news. 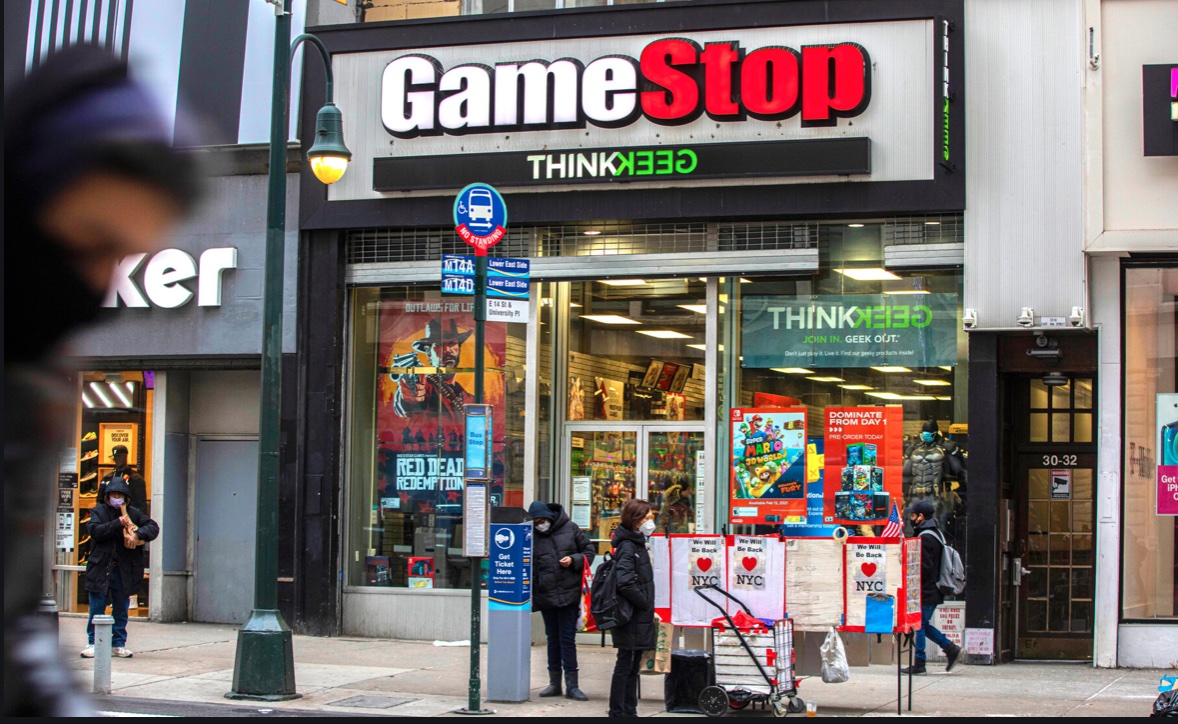 But what exactly happened?

On January 1st, 2021, the Gamestop share was trading at $17.25. However,  during the month of January, the stock grew exponentially and peaked at almost five hundred dollars a share. Usually, such a huge increment in the price of a share is the result of sudden discovery or the invention of a new product or process that would make a company very profitable.

However, in this particular case, Gamestop had done absolutely nothing. The huge increase in the price was the aftermath of a ‘short squeeze’ of Gamestop shares. But before understanding what a short squeeze is, one needs to understand what ‘shorting’, or going ‘short’ on a stock means.

Shorting is a high-risk and somewhat unethical financial trading technique generally used by big hedge-funds (who can afford to take risks), who use their resources and inside knowledge about companies to influence the market and make profits for themselves. Shorting involves three main steps:

In this sense, shorting seems like a trivial procedure, but the short-sellers are no fools; they only plan a short-sell when they get information about a stock potentially going down in price. This valuable information is gained either through insider knowledge or through expert data analysis of the financial state of a company.

When the short-seller gets the information about a company’s potential collapse, they sell the stock which they have borrowed, wait for the price to come down (which is usually accelerated by the huge amount of shares the short seller sells), and then buy back the shares at a lower price, return the shares with some interest, all while making a neat profit for themselves. 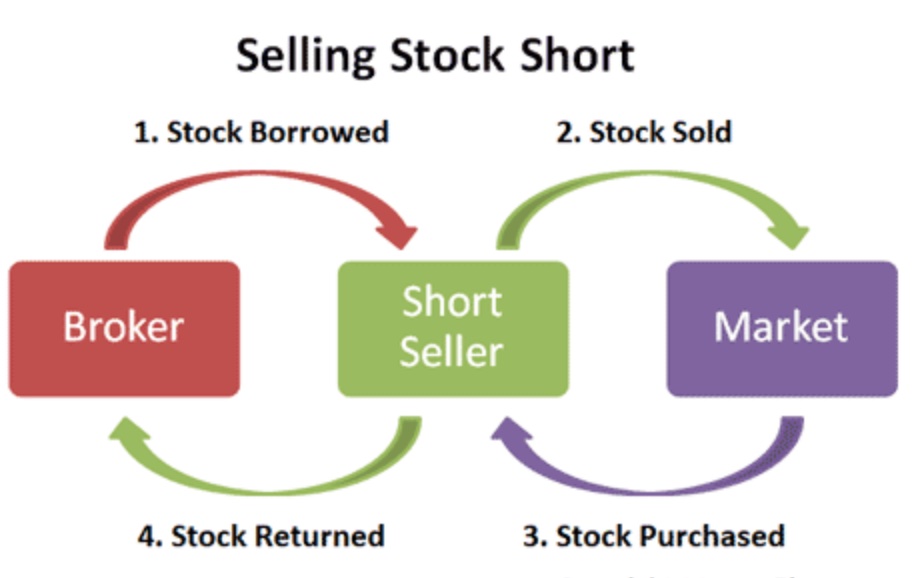 What is a short-squeeze then?

As mentioned above, shorting is a very risky trading technique. When someone shorts a stock, they are betting on the stock price falling. But sometimes the stock price can rise, which can lead to huge losses for the seller. To simplify, here is an example.

Suppose company A’s share is selling at $5 per share. Through some inside information, person X  got to know that the company is going to announce some bad news which would have made their stock skydive. To take advantage of this situation, person X borrows 100 shares and sells them at the $5 market price. But the inside information received turns out to be false and the company will actually be celebrating some extra profits, which raises the value of their shares to $7.

Since person X needs to return the 100 shares, X starts buying them back before they start becoming more expensive. But due to the market mechanism, once X starts buying shares, they are consequently increasing the demand, which further raises the price. This ultimately increases X’s losses. In theory, if X buys a huge amount of shares, the losses incurred can be infinite as the price will keep increasing as X buys back more shares.

What happened when Gamestop shares were shorted?

In early January, the hedge fund Melvin Capital decided to short-sell Gamestop shares as they believed that the company was going to go under because of the disruption of the pandemic on its business. This news reached an online forum called r/wallstreetbets on the social media site Reddit.

This online forum consisted of retail (non-financial professionals) investors who are known for risky stock trading. They actually thought that the Gamestop share was undervalued (worth more than what it was trading at) and quickly realized that if they acted as a group and started buying Gamestop stock to counter the short selling, they could create a short-squeeze situation (if they started buying shares, the share price would rise above the price Melvin Capital sold the stock at, creating a short-squeeze).

Through the use of trading apps like Robinhood that don’t charge transaction fees, hordes of retail investors started buying Gamestop shares, which eventually started rising because of the increase in demand for it.

Normally, in such a situation, the transaction fees and the riskiness would have stopped the public from buying shares but most of these investors were quarantined and bored at home, so when the news of a potential short-squeeze situation erupted, many jumped at the opportunity and started to buy Gamestop shares.

At some point in time, Melvin Capital would have jumped on the bandwagon of buying Gamestop shares as they had to return the shares they had sold and their large-volume buying made the price sky-rocket. The newest social-media influencer, Elon Musk, helped further increase the price by tweeting “Gamestonk!!”, which gave more attention to the stock. 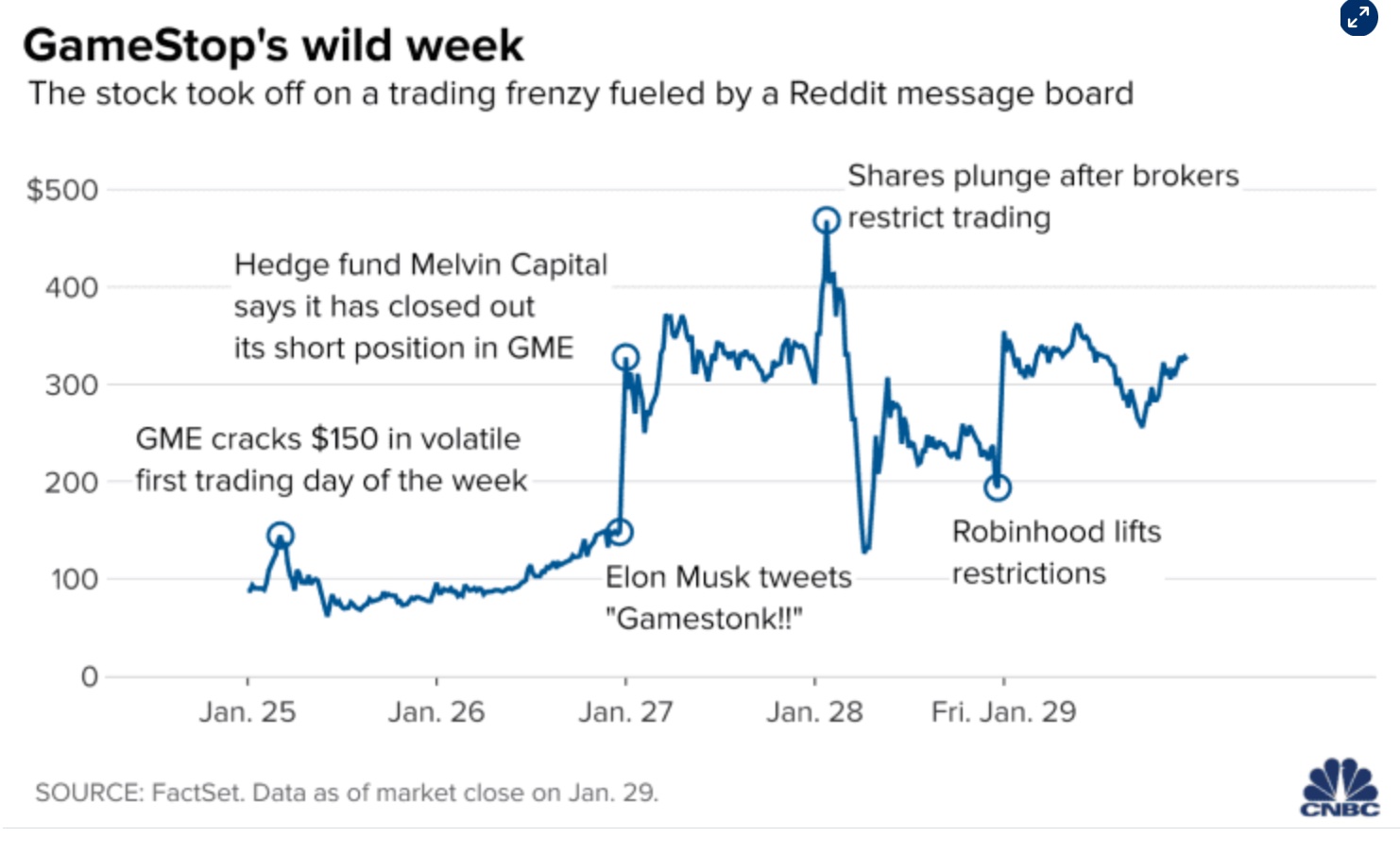 The Gamestop share price continued to rise throughout the majority of the month of January, but it was suddenly brought to a halt when Robinhood, the app through which most of the retail investors did their trading, stopped allowing the purchasing of Gamestop shares.

This was a highly controversial move that went against the basic principles that Robinhood had been built upon - that it would allow the common man to trade with freedom. The move to stop the trading stunk of behind-the-scenes business with financial authorities (perhaps even Melvin Capital).

However, this move did what it was supposed to - halt the trading of Gamestop and bring its value down. Robinhood came under huge fire for this move.

Why was this event significant on Wall Street?

This event may turn out to be a one-off event where the common man beat the huge Wall Street firms, but it will have huge consequences on any future short-selling plans.

As Gabriel Plotkin, the hedge-fund manager of Melvin Capital who planned the short-sell said,
“They exploited an opportunity around short selling and we will have to adapt and the whole industry will have to adapt”

Many retail investors felt like this was an opportunity for revenge for the 2008 bailout of the financial industry by the government, which used taxpayer money to save the banks from collapsing. Many common people benefited greatly from this short-squeeze; people paid off their home loans, student loans, hospital bills. On the other hand, Melvin Capital lost $4.5 billion dollars of assets.

The Gamestop short-squeeze was a significant event in the history of Wall Street. It showed that when people unite against a cause, they can take down much bigger opposition. From now on, all hedge-funds will think twice before launching such attacks on companies.

Finally, this event also showed how important information is in the Financial industry and how when it gets into the wrong hands, it can cause a lot of destruction.