A Vicious Cycle: Economic and Racial Disparities in Higher Education

Growing up, we are taught to believe that the surest way to financial success and a well-paying job is through a college degree.

Yet is this idea accurate? Does receiving a college degree determine economic security later in life?

The notion is that well-paying jobs require a college degree. However, the path to success is not that straight of a line.

Higher education is supposed to be a ladder to success, but the ladder's steepness varies between socioeconomic and racial groups. The ascent is easier for wealthier families, but for those who begin from or near the bottom, it is a difficult slope to climb.

The unfortunate reality of higher education is that it creates a vicious cycle; it further entrenches income inequality, which disproportionately impacts and perpetuates racial disparities in society. Even more worrisome, this cycle is bound to get worse if concrete actions are not taken soon.

To begin, we must first look at the current income inequality present in higher education.

Children from low income are vastly underrepresented at Ivy Leagues and prestigious colleges, with only 5% from the bottom 20% of the income distribution. That lies in stark contrast to the wealthy, with 14% of students hailing from the top 1% in 2017.

Why is this? In reality, colleges want wealthy students to attend, and they would prefer to admit them to protect their national rankings and endowments.

Richard Kahlenberg, a senior fellow at the Century Foundation, found that colleges have built rankings into their strategic plans, with even presidents getting bonuses tied to them. "Universities don’t want to risk sliding in those standings to protect their socioeconomic diversity. Despite their protests, presidents do care about rankings. Trustees notice them.”

As you can see below, Black families have lower median wealth than white families. When taking into account Kahlenberg’s findings, Black communities are disadvantaged in the higher education sphere. 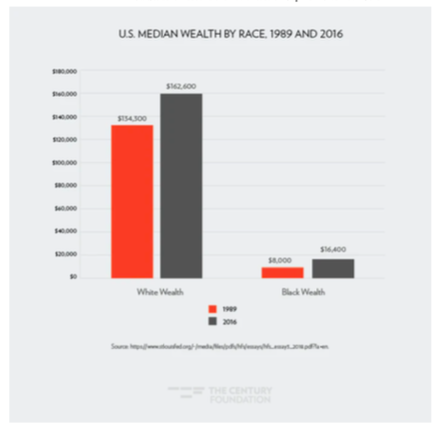 Wealth disparities also impact access to resources, which is instrumental in applying for and deciding whether or not to attend college.

The wealth gap and access to resources plague minority communities, but the most detrimental factor that perpetuates economic and racial inequality in higher education is student debt.

The generational wealth gap manifests itself in the unequal impact of student debt.

In a study by Georgetown University’s Center on Education and the Workforce, it was discovered that two out of three good jobs (defined as jobs that pay a family-sustaining wage) required some education or training beyond high school, and more than half of these jobs require a bachelor’s degree. University education is needed to get a job that pays well, but to obtain a college degree is to understand the risk of taking on student debt.

With rising tuition costs, the issue of student debt has only become worse.

In fact, in 2020, the United States surpassed owing over $1.7 trillion in student debt for the first time. Student debt, however, does not impact all students equally; it disproportionately burdens lower-income and minority families.

The average undergraduate from the bottom quintile of the income bracket must find a way to finance an amount equivalent to 157% of his or her family income to pay for college. In comparison, it costs a wealthy family only 14% of its income to send a student to college.

This statistic is one of many that demonstrates just how unequally distributed student debt is in the United States. Student debt also disproportionately impacts students of color, who have historically been part of lower-income groups. The graph below details the debt disparity between white, Black, and Hispanic groups. We can see that undergraduates from majority Black areas are more likely to borrow to finance their education than students from majority-white areas. 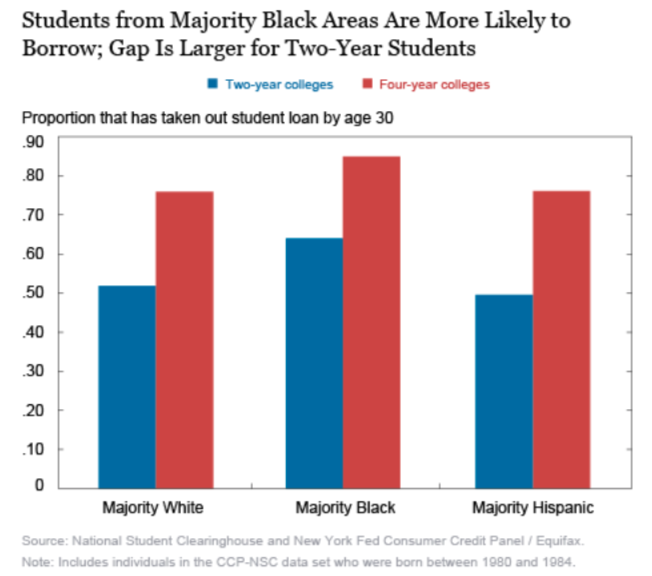 For students burdened by debt, they spend most of their post-graduate lives repaying their student loans. In a societal system that requires good jobs that pay livable wages to survive, student debt appears inevitable. Thus, we are stuck in a never-ending cycle.

Many Americans need a university education to get a good job. However, for lower-income and Black/Brown students, obtaining a college degree means accumulating student debt, which inhibits economic success well into their adult lives.

While, in theory, a university degree should ensure financial success, the current system does not create equitable access to all that is necessary for undergraduates to be successful after college.

Thus, there is a vicious cycle revolving around economic insecurity and racial disparities in higher education. Both serve to reinforce each other.