History of the Direct Action Day

The midnight hour of 15 August 1947 witnessed the birth of two nations - India and Pakistan, carved out of British India. The two newly independent nations had been divided based on religion, considered necessary to prevent social conflict and violence in the future. The momentum for separation had been building up years before, with bloody clashes between Hindus and Muslims often surrounding idolatry and beef seen in almost all major cities at the time.

However, there is one such event that overshadows all. The bloodshed on Direct Action Day, later christened the Great Calcutta Killings, was unprecedented. It all started with a call for a General Hartal on 16 August by the Muslim League to advocate for a separate Muslim state. 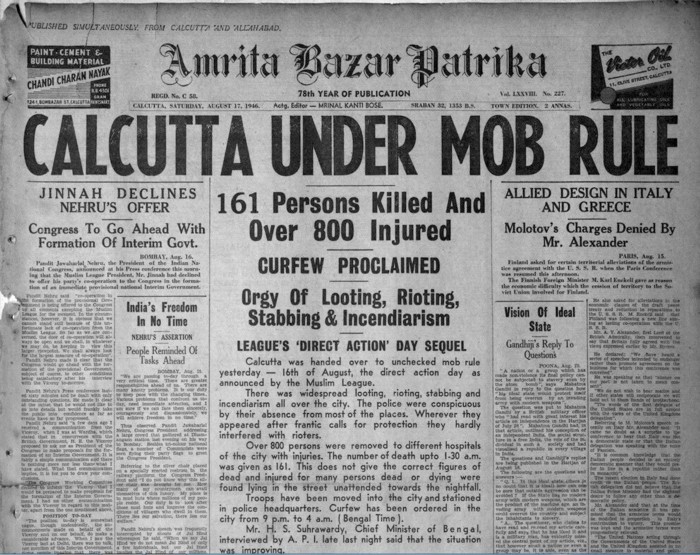 Muhammad Ali Jinnah, leader of the Muslim League, had appealed to all Muslims for a nationwide strike to suspend all businesses. It was supposed to mount pressure on the British rule to concede to their demand. Despite peaceful demonstrations in the Muslim majority provinces of Punjab and Sind, in Bengal, particularly Calcutta, events took a violent turn.

On the morning of 16 August 1946, processions of people had gathered at Ochterlony Monument in Calcutta to attend the rally of Muslim League leaders. Inflammatory speeches riled up and incited anger among the crowd as the situation quickly spiraled out of hand. Shops were burnt down and looted with clashes between Muslims and Hindus resulted in full-blown riots in Calcutta.

The violence continued for the whole week across the city, known as Week of the Long Knives. It featured the grotesque mutilation of victims as well as several cases of rape and sexual assault. The prime victims included the economically backward but also defenseless and outgunned.

The rioters were equipped with knives, swords, cleavers, and metal rods that resulted in heavy casualties. Due to the absence of registration of deaths and incapability of State institutions, there are no reliable official figures. However, experts estimate that roughly 4,000 to 10,000 people died, nearly 15,000 wounded and 100,000 wounded. The prime victims included the economically backward but also defenseless and outgunned.

As the news of the brutal riots in Calcutta spread, there were counter riots in various parts of the country. Violence spread to Bihar, Punjab, United Provinces, and Naokholi (present-day Bangladesh). In some cases, the scale of riots took the form of genocide. The riot sentiment of Calcutta engulfed the whole of India and dwarfed even the Calcutta riots.

Either way, it had a colossal impact on the make-up of independent India.

The Congress leadership that was firm on its stance of undivided free India eventually conceded to the League's demand. Sardar Vallabhai Patel, a senior leader of the Congress Party, was the first to acknowledge that the partition was the only solution to prevent such brutal violence. Even Mahatma Gandhi, the most vocal critic of Partition, accepted the inevitability of the partition of India.

The ghastly riots increased the divide between the two communities but were also a representation of the inability to compromise and anger and hatred that had accumulated between them over the past years.

I live in Faridabad, India. I am an avid football fan and I love watching sitcoms and web series.