Mystery of the Fifty Thousand: Destiny versus Nature

CAMBYSES II: The Second King of the Achaemenid Empire

Cambyses the Second was born to Cyrus the Great and his wife Cassandane. In Babylonian documents dating back to 538 BCE, Cambyses is described as the ‘King of Babylon’.

Cyrus proclaimed Cambyses II as the ‘King of Babylon’ and the ‘King of the Lands’ before leaving for his campaign against the Massagetae, allowing for smooth transfer of power to Cambyses after the death of Cyrus.

In 525 BCE, Cambyses’s major campaign against Egypt began. The king was promised the hand of the first daughter of Pharaoh Amasis II, a marriage to secure an alliance that was not honored by the Egyptians, and this fact served as the precedent for the campaign.

The Pharaoh had originally promised to marry his daughter to Cambyses instead; the daughter of the former pharaoh was to be married to the king of Babylon. Cambyses thus used this as the pretext for subjugating the last superpower in the region.

Amasis died before the Achaemenid army reached Egypt, and hence the war was fought by his son, Psamtik the Second.

The following war saw numerous allies change camp; namely Udjahorresnet, Psamtik’s admiral, and  Polycrates of Samos, who deployed his mercenaries in favor of Cambyses. Psamtik was left without allies.

The Persian troops were victorious over the Egyptian army and by August of 525 BCE, all of Egypt was under the control of Cambyses II.  Like his father Cyrus, upon conquering Egypt Cambyses maintained a conciliatory policy towards his new subjects.

The Persian army was stationed there until 522 BCE indicated resistance in the local population. Petubasits IV became a prominent rival when he challenged Cambyses’ rule.

Following the death of Cambyses, and the unrecorded disappearance of his brother, Darius, a banner lord of Cambyses' army led a revolt. This led to the birth of Darius' rule, who was successful in uniting various regions of the Achaemenid Empire under his banner.

As for Cambyses II, his reputation quickly fell into ruins following his death: many believe that he was assassinated. The Persians remembered him for his fate, as their beliefs saw this as a failure of their king in becoming worthy in the eyes of their culture, their god.

Death in such fashion was a sign that Cambyses had lost divine favor. This resulted in all events from his reign being reinterpreted to fit the narrative of the king falling out of favor in the eyes of the Gods.

Additionally, the Egyptians, who despised the Persian rule by the time, had invented a tyrannical picture of Cambyses and what he represented. This coincided with the time Herodotus began recording the Greco-Persian Wars.

“The son of Cyrus the Great, Cambyses II deployed fifty thousand hardened Persian soldiers during his occupation of Thebe to attack and assume control of the Oasis of Siwa: by doing so challenge and destroy the oracle of the Temple of Amun as a punishment for not accepting his role as the legitimate ruler of Egypt.

The army, after marching for seven days in the shifting dunes of the Sahara, reached an oasis - which many historians believe to be El-Kharga (the Southernmost oasis of Egypt). After they departed from this location, it is said that the army was never seen again.”

This myth is said to be the work of a Greek historian Herodotus who believed it to be true. He saw this event to be a lesson from the Gods directed at Cambyses II for his ruthless and tyrannical actions. 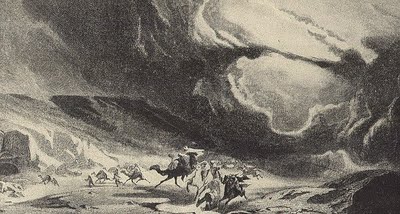 An Artistic depiction of the event.

In the case of Herodotus, he was a Greek historian whose most well-known work was the detailed accounts of the Greco-Persian wars. Many archaeologists and historians believe that the myth created by Herodotus was based on his personal opinions on this Persian emperor.

According to this Greek historian, the loss of the army was a product of Cambyses II: tyrannical rule; the assassination of his brother; butchering of the Apis Bull - a religious figure of Ptah, which represented the goddess of fertility.

Many inaccuracies were found in Herodotus’s myth: the Apis bull had in fact died due to natural causes; Cambyses II was a model ruler, and the assassination of his brother was of political nature.

Professor Olaf Kaper (Leiden University, Netherlands) puts forward another compelling reasoning behind this myth. He believes that the army was not lost to the wrath of nature but rather was defeated by the Egyptian rebel leader Petubastis III.

According to his research, the army’s destination was the Dakhla oasis; the last known location of Petubastis the Third’s army. After Petubastis IIIdefeated the army, he went on to crown himself the Pharaoh of the larger part of Egypt, at Memphis.

Kaper reasons that the myth remained unclear because of the invasion of Egypt carried out by the fourth Achaemenid emperor, Darius the First, which ended in widespread bloodshed.

Following his victory, Darius I is said to have authored the myth of the sandstorm, which had destroyed Cambyses the Second’s army as it had now become a matter of pride. Through this manipulation, Heroduts was capable of only recording this chain of events.

The lack of evidence does not mean the absence of it.

In modern times, the mystery of the fifty thousand continues to interest veteran and amateur archaeologists alike.

From the 19th century, many expeditions were led into the desert but no evidence was found. The search focused primarily on the caravan route that connected the Dakhla Oasis and Farafra Oasis.

In the early 2000s, twin brothers Angelo and Alfredo Castiglioni made headlines by finding evidence to support their belief, making them the first archaeologists to substantiate a plausible theory.

They believed that the army was indeed sent by Cambyses II to take control of Siwa, but instead met an unfortunate end before reaching their destination. Angelo and Alfredo were already renowned archeologists due to their discovery of the ancient Egyptian ‘City of Gold’ called Berenike Panchrysos (an ancient town, which earned its fame due to the proximity to numerous gold mines.) 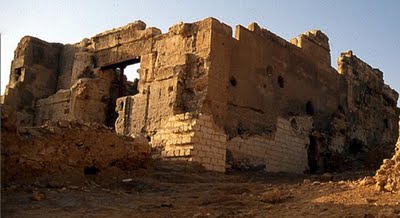 The temple of Amun, also known as the Temple of the Oracle, which Cambyses' army had set out to destroy.

The expedition; as Alfredo explains, started in 1996 to investigate the presence of iron meteorites near Bahrain (an oasis, very close to Siwa).

The brothers; aware of the sandstorm myth, were intrigued when they came across half-buried pots and human remains. Proof of ancient warfare; a bronze dagger and several arrow tips were discovered.

All these objects were dated back to Cambyses the Second time, becoming the first Achaemenid objects in this region; as a cherry on top, it was quite close to Siwa. A cave—a particular rock formation—was also found near to this discovery large enough to house soldiers in case of deteriorating weather in the region.

"Its size and shape made it the perfect refuge in a sandstorm," Castiglioni said.

The brothers tried to see this from another angle. A different route to which was believed to be the path taken by the army.

This route allowed for the army to march undisturbed; as the conventional route would have forced the army to fight the Egyptian army at every oasis, and also allowed them to arrive at the rear of their enemy location.

To their delight, they found traces of such a route that existed at the time.

To test their theory, they utilized geographical data of the region and found desiccated water bodies and artificial wells, of which hundreds of earthen pots carry water. This level of preparation could have made the journey through the desert possible.

The brothers were also able to uncover yet another detail. Ancient maps had made errors in locating the Temple of Amun. The soldiers were surprised when they came across the khamsin—the hot, strong, unpredictable southeasterly wind that blows from the Sahara desert.

Many soldiers found safety in the cave, whilst others were scattered, left to the mercy of nature. Many are believed to have made it to a nearby oasis and survived. Following this discovery, a mass grave was reported to have surfaced, decades ago during a particular wind condition in the region.

According to the Castiglioni brothers, the grave was exposed by tomb robbers, and the bones were sold to tourists. The archaeologists reported their findings to the Egyptian archeological authorities but are yet to receive word about the future of their search.

They believe that the remains of the fifty thousand soldiers remain buried in the desert. As such, more expeditions need to be undertaken to completely unravel the mystery behind the three thousand years old story. 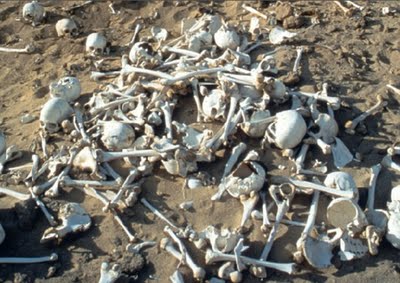 The mass grave of Cambyses' Army.

Is Nature trying to teach us a lesson?

I am reminded of the poem; Ozymandias.

A poem about an emperor whose legacy deteriorated with time and his achievements lost their glamour. Maintaining an empire is no easy task, nor is conquering Egypt, but as we all have come to understand, destiny has its way.

The only thing to be remembered of the second king of the Achaemenid empire is the myth of his fifty thousand troops, which are believed to have perished to a natural cause.

Modern-day proof indicates this, but for you and I, reading this article behind the safety of our devices, there is a lesson here that Nature wants to teach us.

This lesson has two participants; the destiny of the person and the other being the unpredictability of nature.

Cambyses II had planned on invading and expanding his borders to Carthage, the other side of the Mediterranean sea, but was forced to stop as his empire plummeted down into a rebellion led by his supposedly dead brother and the untimely fate of his army in the sands of Sahara.

This myth stands as a reminder—nothing is ever in our control.