The Economics Of Terrorism

The attack of  9/11 caused a loss of more than $100 billion to the federal government. Catastrophic circumstances led India to spend approximately 1.14 trillion rupees in 16 years just on Kashmir security to defeat regular terror attacks.

In 2017 Saudi Arabia and Oman spent more than 10% of their GDP on the military. These numbers tend to increase with rising in terrorism and loss of life,  and yet the world is in a state of untapped potential due to high valued resources all going towards countering terrorism.

The repercussions caused by terror attacks are devastating for not only social and health welfare, but also ental wide-ranging immediate, middle, and long term economic disruptions for the attacked nation.

The situation is even worse if the attacked nation is already poverty-stricken, or is dealing with a slow pace of growth.

The first and foremost concerns are to cater to the needs of the affected area immediately—this would require funds and infrastructure to treat the patients, to arm the troops in the area, as well as restricting all activities in response to the measure of attack for several days.

This hampers economic activities as well as leads to the outflow of funds that may be reserved for other purposes. Relief programs and compensations for the casualties, search operations, media and meetings, global image, and reputation are the major points of immediate economic actions. These add to the cost majorly depending upon the size and intensity of the event.

On a nationwide level, there are questions surrounding food, security, shelter, and survival catacombs for the population residing in the specific frame of the misfortuned area.

It is very obvious to observe the upcoming retrospective mid-term economic impacts of terrorism — it mostly creates a roadblock to the effective growth of the attacked nation. Not only are there expenditures on relief projects, but also there are a lot of indirect costs associated with terror attacks.

The economy driven by supply demand forces tends to dislocate for the optimum level for a certain period of time. The population becomes more cautious about their expenditures and tends to save more rather than to consume for uncertainties. This reduces demand for goods in the economy; as such, prices are likely to fall in the short run.

Analyzing the impact of price reduction, it is apparent that the effects always turn out to be a direct effect on labor and employment. On the parallel side of the market, supply is also restructured, international trade is also affected simultaneously.

The flow of the financial sector of the economy also gets disrupted due to such shortcomings.  The banking and insurance domains see a high demand for life insurance as more people feel the need to secure their uncertain futures in such countries. High rates prevail in the insurance domain, making the poor more vulnerable.

Furthermore, whenever there is a sudden event such as a terrorist attack, the stock, and other financial trading markets become centers of attraction. Companies of the affected countries face a drop in market values in global stock exchanges. The national stock exchanges appear to be catastrophic until the circumstances improve.

Most of the developing nations attract tourists, due to their less exploited land and environment. This provides for a major proportion of the economy, and if terror attacks occur more frequently, this may discourage tourism. The destination can be attractive enough, but until it's safe, the beauty will be hidden from the sight of travelers.

This loss of tourism results in a loss of revenue. Vangelis Panayotis, a director of MKG tourism consultancy, forecasted a decline of 30% in France's tourism industry after the Nice attacks of 2016 on Bastille day.

The major and the most important economic implication is future government expenditure on national security and goods. It is generally believed that the government doesn't finance the security infrastructure, arms, and ammunition using taxes; instead, the expenses on the security domain have to be financed through loans.

This leads to deficits in government accounts—accordingly, to finance the budget deficits, the government looks to printing money as an option. However, this will lead to inflationary pressures. 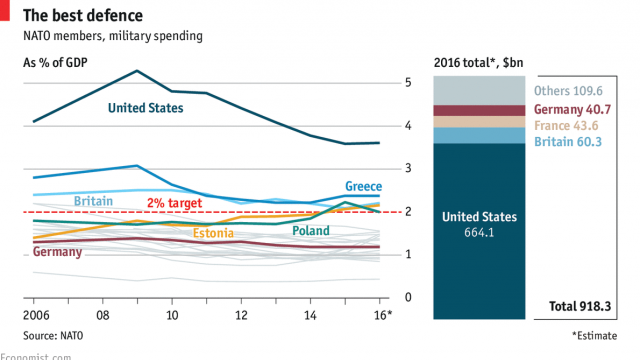 The graph above shows the increasing percentage of countries' expenditure for fighting terrorism over the years. This clearly shows that with the increasing risk of terrorism, countries are contributing more of their finances to combat terrorist activities and aid in preventive measures by the means of military spending.

Notably, for every spending on security, governments will have to reduce the spending on other important variables necessary for the population as a whole. Thus, this is furthermore an important issue to address.

Moreover, in a nation prone to distractions, foreign direct investment is likely to be constantly low. This remains the reason why such countries are left behind mainly due to untapped potentials. Investors see resources as an important aspect, but the security and certainty of production is another factor that might gain power over resources.

Coming onto the part of the good bureaucracy, communications and good relations with international bodies and countries can save the attacked economy in the long run. Financial crises are often solved with the help of good bureaucracy.

However, yet again, a country with regular terrorism is certainly disregarded and might not attain the point in which national security is maintained. This generates a consequence that hinders structuring good international relationships.